I have been using Graylog2 and VMware Log Insight for some time now and wanted to try out Logstash finally. So the first thing that I wanted to do was create an automated script to do most of the install and configuration to get everything running. I figured that as I am going through this I would share with everyone and start building on this script more based on feedback. I created a Graylog2 script (located here) that has proven to be of great help to the community and figured I might be able to do the same with the Logstash community, but even if it didn’t I would learn a great deal about Logstash in the meantime. There is a great community around Logstash so getting support should be very easy. As well as, I am just starting to learn Logstash now so this should be a lot of fun. Which also means that there will be a good amount of change around this post.

I would recommend using a clean install of Ubuntu 12.04 or 14.04 to install onto. However; if you decide to install on an existing server I am not responsible for anything that may get broken. :)

So here is how we get started and get everything up and running. Open up a terminal session on your server that you will be installing to and run the following commands.

You will be prompted during the script to enter your domain name, and PFSenseFirewall hostname. These will be used to configure logstash filtering for your and PFSense Firewall. If you do not monitor any or use PFSense just enter some random info into these. These are purely just collecting info to pass into a filtering rule for Logstash.

Once complete open your browser of choice and connect to http://logstashservername/kibana or http://ipaddress/kibana.

You will see the following screen once connected. Seeing as we are setting up Logstash with Kibana go ahead and select the link on the left.

Now here is a screenshot of some actual ESXi logging. Notice the tag called VMware, that is created by the filtering rule that we created with the installer which, is based off of the naming convention we passed to the installer. 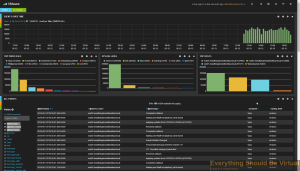 Here is another screenshot of logging graphs by adding different search criteria items.

So what we have done with this script is installed , Nginx, Elasticsearch, Logstash and Kibana3.

Now setup your network devices to start sending their syslogs to the HAProxy VIP and if your device supports sending via TCP, use it. Reference the port list below on setting up some of the devices that are pre-configured during the setup.

Below is a decent /etc/logstash/logstash.conf file that I am using and will be updating periodically. Some of these settings will be included in the install script but not all of them. You will need to change the naming for ESXi and PFSense for your environment. (Or just use the auto-install script).

For Windows Event Log’s I highly recommend using NXLog for Windows. I am including a fuctional nxlog.conf file for you to use as well with the above logstash.conf configuration. 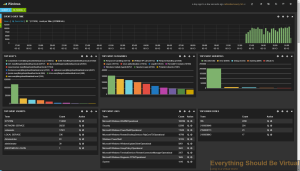 That should be it.

All comments and feedback are very much welcomed and encouraged.